This is the first part of A Journey to Java 9 modules. See the table underneath for links to the other parts.

During the course of this article we will migrate an existing Java 8 application to a fully modularized Java 9 application that leverages the capabilities of the Java Platform Module System (JPMS). This article is the first installment of a series of articles that showcases a migration path towards a loosely coupled and modularized application architecture.

The output of both algorithms is a list of indices that indicates all the starting positions of a given fragment of text within the larger text.

The Java 8 application also features a CLI which enables its users to search for a fragment of text in a larger text using one of the supported algorithms. Its CL interface consumes three arguments:

We use Apache Maven for dependency management and for building the application.

The Java 8 application is our baseline for the migration to a modularized Java 9 application using the JPMS.

The baseline is a multi-module Maven project comprised of two modules.

The compile-time dependencies on the level of our Maven modules are shown in the following diagram. 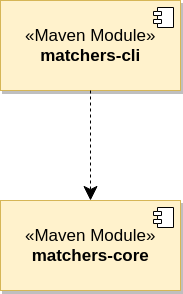 Fig. 1: The application comprises two Maven modules: matchers-core which defines the API and strategies and matchers-cli which builds on top of the core library.

Let us take a brief look at the internal structure of these Maven modules. 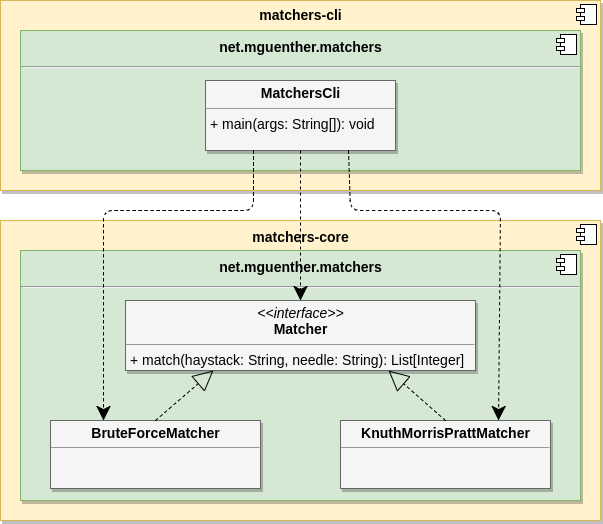 Co-located with the interface are the aforementioned implementations in classes BruteForceMatcher and KnuthMorrisPrattMatcher.

Although Maven module matchers-cli uses the interface Matcher to run a specific algorithm, it requires knowledge about the supported implementations. This is due to the fact that a user is able to select the algorithm she wants to use by its (abbreviated) name, which is mapped in class MatchersCli to an instance of the class that implements the algorithm. The listing underneath shows an excerpt of that class demonstrating the resolution and execution of the string matching algorithm.

Obviously, an approach like this has a couple of flaws with regard to encapsulation, due to the limitations of the visibility and access control imposed by Java up until version 8. This results in a tight coupling of both modules. Even though we could provide a third Maven module matchers-api to separate the API from the implementation, this separation would be somewhat artificial, since the CLI would require both modules matchers-api and matchers-core nonetheless, giving it access to the implementation details in matchers-core.

This is not the only code smell. For instance, the CLI is not in compliance with the Open-Closed-Principle, since adding a new implementation in matchers-core is not available in the CLI if it is not explicitly wired into it. These smells can be mitigated though through a proper choice of design, but have nothing to do with the aforementioned limitations that the JPMS tries to solve.

With Java 9 and the JPMS we strive for a solution that provides a better encapsulation by truly hiding implementation details from consuming modules in such a way that we only need to express compile-time dependencies via JPMS (and of course via Maven on the Maven level), while being able to contribute implementation details through the module path by simply putting the respective JARs onto it.

Let's see how this goes.

Adapt the Maven build to use Java 9

So, first of all, we will update our Maven build so that it properly compiles Java 9 sources. This step is pretty basic, as we only have to adjust the configuration of the maven-compiler-plugin and - of course - environment variables, so that Maven can pick up the proper JDK.

Depending on the settings on your local machine, you can either use a global JAVA_HOME environment variable that points to the JDK 9 or you can use the Maven Resource File (~/.mavenrc). Either way, your PATH variable should include a reference JDK 9.

On my machine, the path to JDK 9 is /usr/lib/jvm/java-9-oracle, so the configuration looks just like this:

Running a mvn clean install from the project source folder should still yield a success. The configuration of the maven-compiler-plugin states that we want to see any kind of warnings and deprecated usages during the build. In our particular case, there are none: Our string matching algorithms work perfectly fine up to this point.

This is expected as Java 9 can be used just like any previous version of Java. You do not have to commit to a fully modularized build to begin with. What happens if you do not is that any code outside of a specific module ends up in the so called unnamed module. The build will not break, since the unnamed module is able to read all other modules.

Please note that although you do not have to commit to the JPMS, the JDK itself is still modularized as of Java 9. This may lead to broken builds if you reference code that is not reachable through module java.se, which is the root module per default if you do not use designated modules for your code. This is for instance the case if your code uses the popular JAXB API.

Before we dive into the modularization of our existing codebase, we have to talk a bit about the implications on the JPMS when using it together with a build tool like Maven. It is perfectly viable to have multiple modules inside a single src folder, as long as module boundaries are properly set by providing the necessary module descriptors for your modules. Maven implies a restriction that enforces a 1:1-relationship between a Maven module and the Java module it contains. So for instance, if our matchers-core module comprises two Java modules within source folder src, call them matchers.api and matchers.impl, the IDE will present the following error condition:

In this case, our solution will not compile. This is pretty self-explanatory actually: The target artifact of a Maven module is a single JAR (or POM, or WAR, ...) which is addressable by its Maven coordinates. Allowing multiple Java modules (which are packaged as JARs themselves) within a Maven module would break the semantics of the Maven coordinates. 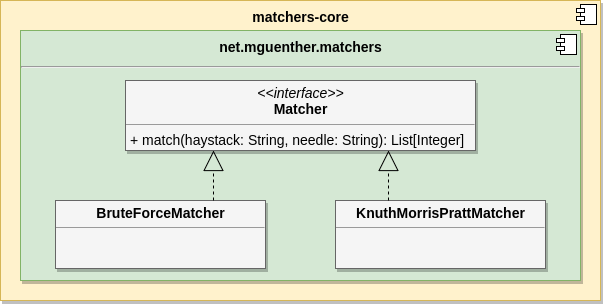 Fig. 3: Both API and implementation are sharing the same package.

All interfaces and classes reside in the same package. First of all, we will create a new Maven module, call it matchers-api that will host a Java module, call it matchers.api, comprising the API for our string matching algorithms. The interface Matcher is copied over to this module and we will expose it to other modules by exporting the whole package1. We will keep the interface Matchers in its original module as well, so the build does not break just yet.

After applying our changes, the source tree of the module looks like this:

As for the actual implementations of interface Matchers, we will re-use Maven module matchers-core and introduce the Java module matchers.impl to it. This is done by adding a module-info.java to the folder src/main/java of the Maven module that declares a requires-relationship with matchers.api (note that we explicitly address the Java module, not a package) and that also declares the package that it exports.

But we still have an error, though, and that error is currently breaking our build. The IDE already points it out:

Let us take a step back and look at what we achieved so far. 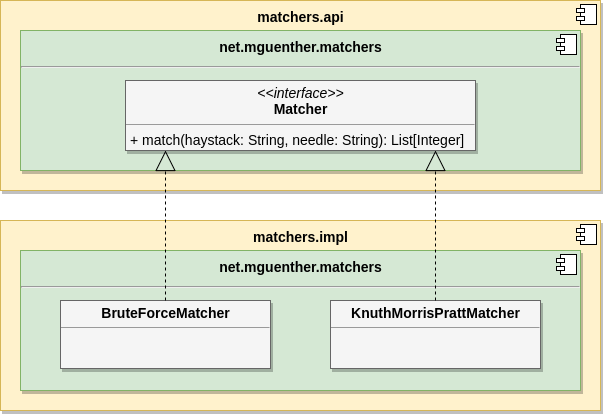 Fig. 4: The JPMS prohibits packages that are shared across multiple modules.

Although the separation into two distinct modules fits quite nicely, the package boundaries do not: We introduced a so called split package. A split package is a package that spans multiple modules. The JPMS enforces that a single package has its dedicated Java module and thus prohibits the use of split packages. From a package design perspective, this seems a bit unnatural as both modules contribute to the same component and, at least from my understanding, a component can surely span multiple modules2. 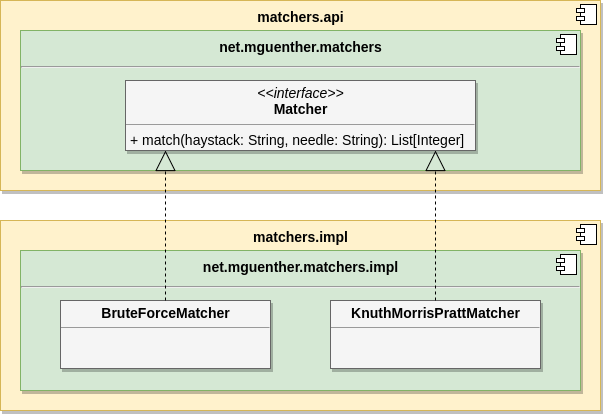 Fig. 5: Each Java module has to use its own package.

The standard Maven directory layout still applies, even if we take the JUnit tests into account that exist for the matcher implementations. After applying all changes, it should look like this.

Refactoring the CLI to a top-level application module

Although we provided a clean and working separation for the API and its implementation, our current application will not compile. This is due to the fact that Maven module matchers-cli does not implement a Java module. Hence, it is moved to the unnamed module and from there it has no access to the classes and interfaces that are exported from Java modules matchers.api and matchers.impl. So, if we try to compile the solution anyway, Maven will fail with a compilation error as it cannot resolve the symbols for classes that the CLI imports.

We simply execute the same procedure again as we did already when we separated the API from the implementation and introduce a new Java module as part of matchers-cli which we aptly name matchers.cli. Its module descriptor needs to declare a requires-relationship to both modules: 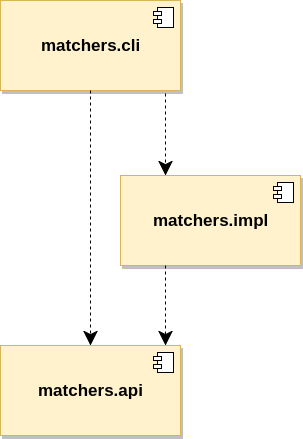 Fig. 6: The CLI still has an unwanted dependency on matchers.impl.

But contrary to our initial mission statement, this makes one thing quite obvious: We are still not getting rid of the unwanted dependency from CLI to the implementation. We will address this issue in the next article of this series.